Welcome to the second edition of The Thursday Throwdown.

A few weeks ago, I got into a library-hold frenzy and reserved several books that are memoirs of a person's reading life. What could be better than reading about other people who love books as much as I do.

I started with this book 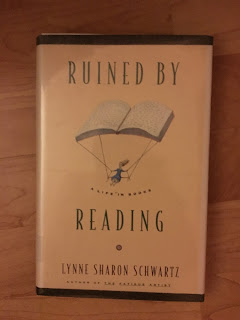 and immediately encountered this quote, "Rarely does the daily paper move me to reexamine my own life. But a recent New York Times piece quoted a Chinese scholar whose 'belief in Buddhism . . . has curbed his appetite for books.' Mr. Chan says, 'To read more is a handicap. It is better to keep your own mind free and not let the thinking of others interfere with your own free thinking." Wow, I'm really going to have to disagree with Mr. Chan. If I followed his advice and kept my mind free for my only my own thoughts I would spend all my time mentally debating which Brady Bunch character I find the most annoying and wondering whether my Grandma was deliberately trying to copy Nancy Reagen's sense of style or was it a coincidence? Do I really need more space in my brain for "deep" thoughts like that? I think I prefer letting other people's thoughts take up some of that mental space.

Once I made it past that first thought provoking paragraph (which the author disagreed with as well), I became a little bit bored. There was too much baseball talk. My brain does not treat sports talk as if it contains actual words. Instead, it's like when the grown-ups are talking on Charlie Brown.


I feel like I'm being a bit unfair to this book because it wasn't badly written. It was just lacking in fun. According to the author, she read high-brow literature even as a child. Maybe I'm letting the fact that I spent my tween and teen years reading books with titles like Six Months to Live and The Soldier's Baby influence my opinion too much here, but I spent the whole book having imaginary arguments with the author that went a little something like this: "Oh come on. Didn't you even once read a Danielle Steel novel, or secretly sneak behind your Mom's back when you were 12 and read a book about a man who was having an affair with his brother's girlfriend in the stables."

This is all hypothetically speaking, of course. I would never EVER read such a trashy book. . . Okay I admit it. I did. Once. Okay, twice. Or more. But definitely not more than 50 times and most of the people were having affairs in much classier places than a stable. Occasionally the affair would happen in a car. Or on a roof. And it was just a passing phase that lasted for a month . . . or a year and half.

The point is that I always wonder about people who claim to never read anything but the classics. Am I the only one who wavers between highbrow classics and mindless, fluffy (but highly entertaining) trash? I love to read so much that I love it all; the classics, the trash, the wholesome Christian novels, the mindless fluff, books that are great, books that are so bad they almost loop back around and become good again, and everything in between. And I was really hoping to find a memoir about books that was written by someone who feels the same way. So, while this wasn't a badly written book, it wasn't for me.

On to the next book: 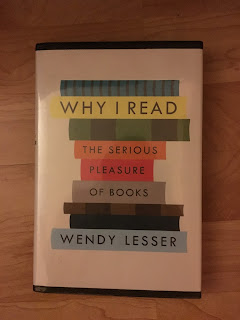 The author almost immediately expresses disgust for the concept of reading bad books for the sake of entertainment. I'm guessing she would really not approve of the first edition of the Thursday Throwdown. About five pages into this book I started debating in my head, wondering if it's really necessary for me to find a literary kindred spirit in order to enjoy a memoir about books. By page 7, I started to feel like I was on an uphill drive, up a steep mountain, in a car with wheels that are starting to fall off. By page 11, I gave up on the book. Again, it wasn't a badly written book. But I couldn't handle reading another 200 pages from someone so highbrow. Aren't there any authors who spent their childhood summers reading just one more page of Trixie Belden or Cherrie Ames under the covers. (Side note: why do all the wholesome children's books written for kids in the 50's and 60's have main characters with names that sound like porn stars?) Aren't there any memoir writers who walked into a used bookstore and just HAD to buy the novelized version of General Hospital.

And for those of you who were wondering, yes there really is a novel of General Hospital.

And yes, I really did buy it: 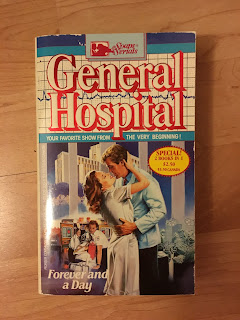 And I can't even claim it was some crazy thing I did when I was a kid. It happened six months ago. My only regret is that I've let it sit in my to-read stacks for so long.

I decided that since I didn't actually finish book # 2, I would give this genre a third try, although at this point I was seriously questioning a few things; 1) do I have crappier taste in books than these authors or 2) am I just more honest about my crappy taste? 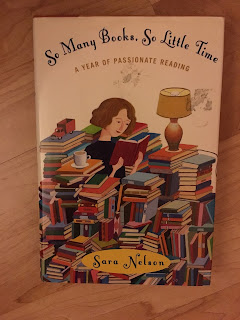 Book # 3 turned out to be significantly better than the first two. Although, the author was almost as pretentious about her reading habits as the first two authors. At one point she starts talking about how she questions whether she can stay friends with someone who likes books she hates. I kept searching for some hint that she meant this in a tongue-and-cheek way, but she seemed to actually mean it. I will admit that I've said the following thing to someone I know, "You don't like frosting. I don't even know how to relate to you right now. I once put frosting on a Hershey's candy bar. I'm not even sure we can be friends right now." But I was always joking (I was joking about the not being able to be friends part. I was dead serious about putting frosting on a candy bar. And it was delicious!)

But, aside from the occasional moment of pretentiousness, the book contained some of the fun I was looking for. Not as much fun as I would have liked, but it was still an enjoyable read and the clear winner of the three books!
Labels: The Thursday Throwdown