Welcome to another edition of Friday Five, dear readers! Today I'm linking up with Carolina Charm and KTCupofTea for the Friday Five.

You're going to have to indulge me today as I turn into the kind of person I used to make fun of and force you to hear stories about my almost-four your old niece and 21-month-old nephew (feel free to mock me in the comments sections for being a ridiculous Aunt. I probably deserve it after that time in a department store when I told a Sofie story to a complete stranger.)

1. I love making to-do lists. A few weeks ago, Sofie saw one of my to-do lists and asked me what it was. After I explained what a to-do list is to her, she told me she wanted to make her own list (with me playing the role of her secretary.) This was the end result: 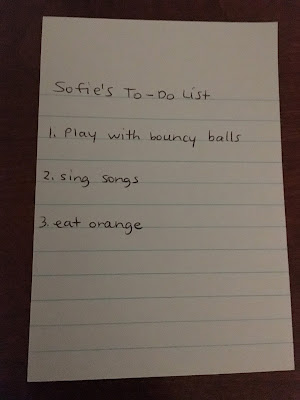 2. Tyler is currently obsessed with Kermit and Fozzy. All day long he says "I want to watch Kermit and Fozzy on the iPad." Like a drinker who doesn't know his limits, he sometimes has to be cut off. Then he's forced to endure the torture of being expected to play with his toys (life is so hard when you're 21 months old.) I got a hilarious video of him dancing so hard that he would have fallen over if Grandpa hadn't caught him:

Is there anything worse than accidentally buying a rubber ducky that just won't shut up?

4. Two weeks ago, my Mom and I took the kids to go see Grandpa at work and Grandpa gave Tyler a foam football. On the way home, I looked in the rearview mirror and saw that Tyler had bitten a chunk out of the football and was currently spitting it out and making gagging sounds. I said, "Tyler, don't eat the football." Whenever we tell him not to do something he says, "Okay," in the same tone of voice that Eyeore uses.

When we got back to the house, I saw that he had actually taken 3 bites out of the football and I could only find 2 of them. And his tongue looked really brown. Then I had the following conversation with my Mom:
How much harm do you think eating a football would do to a kid?
Do we call poison control and say "our kid ate a football."
I think he'll be okay.
But how can we be sure.
I feel like he's too old to be doing stuff like this.
Look how brown his tongue is.

Then Tyler walked up to me and pulled the third piece out of his pocket and said, "It broke. It broke." (Well, it didn't so much break as he tried to eat it. But why split hairs.) Here's the thought I'm left with after The Football Incident, so he decided he was a little hungry and looked at the football and thought what the heck, I'll have a little snack. I question his life and snack choices, but whatever. Some things you just have to try once before finding out it's a really bad idea (like that time I bought a hat, expecting it to make me look fun and retro, and instead I looked like a pimp.) So he tried it. He found out it was nauseating. He gagged it back out. Fine. I can accept this. But why the second bite? WHY? (I can't even let myself imagine the thought process that went into the decision to take the third bite.)

5. I've run out of Sofie and Tyler stories for now, so let's talk about the worst parenting/Aunting stage. We haven't gotten to the worst stage yet with Sofie and Tyler, but as a former nanny, I know it's coming:

Some people say teething is the worst stage with children. Others argue that potty training is the worst phase. I say the worst phase of all is when kids discover riddle/joke books. For those of you who haven't experienced this horrifying event, allow me to enlighten you. One day you'll send your child off to school expecting them to learn a few things and have a great time at library day. And then they'll get off the school bus and inform you that they checked out a joke book from the school library. Then they'll follow you around for hours reading the worst jokes you've ever heard in your life. You'll try to be supportive. You'll try to muster up a laugh, but it will require every bit of acting skills you possess. Then you'll suddenly remember that laundry you need to fold. You'll sprint towards the laundry room, hoping your child's short legs won't be able to keep up. You'll be filled with hope that you've escaped from this hell you find yourself trapped in. But they'll follow you. Even if you try to take a shortcut through the kitchen in an effort to throw them off track. They'll follow you no matter where you go. As you fold laundry, they'll read bad joke after bad  joke and all the while you'll be thinking I miss my old life. And just when you think you're almost at the end of the book, there's a light at the end of this incredibly dark tunnel and you can finally start to see it, they'll inform you there's a bonus chapter. And then a little part of your soul will start to die.

(Apologies to my regular readers. I cheated on number 5 and borrowed that from an older blog entry.)

And now I want to hear about your week, dear readers. What have you, or your kids (or the kids that aren't even yours but you can't stop talking about them) been up to lately?
Labels: Friday Five. Toddler Life