I have a love-hate relationship with Pinterest. It's a fun, handy way to find new recipes. But it's also a time suck. I get out my computer, open it to Pinterest and tell myself I'm just going to sit here for ten minutes and pin a few nice, healthy salad recipes. Next thing I know, four hours have passed and I've pinned 8 salad recipes and 97 chocolate cake recipes.

My other problem with Pinterest is that for every recipe I try that I love, I try 10 more that I either hate or that are okay but need a lot of tweaking. I'm okay with making minor tweaks to a recipe, but I don't want to have to rebuild the recipe before I can use it. I don't know if I'm just bad at choosing recipes or if this is a widespread problem. Either way, it inspired me to start a new blog feature: Best of Pinterest. Every couple of weeks (or whenever I've acquired enough recipes), I'm going to share with you links to the Pinterest recipes I've tried and loved. I'll try to share as many pictures as possible, but I'm not a person who is in the habit of taking pictures of everything I cook/eat, so some of the recipes will just have links.

I'm easing in to a new healthy eating plan that my doctor has designed for me, but while searching for new recipes to use, I came across a few recipes for food that I used to be able to eat but can't anymore (imagine one gentle Demi Moore-style tear falling down my face) and they were too good not to share.

1. One Pan Healthy Sausage and Veggies 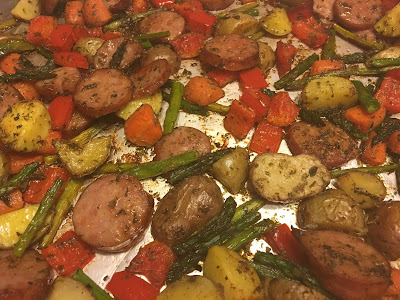 This recipes includes Parmesan cheese, but I'm allergic to dairy so I left it out and it was still delicious! This is also a very versatile recipe because you can use any vegetables you want for this dish, which makes it the perfect clean-out-the-fridge recipe. I used carrots, asparagus, and part of a red pepper that I had left over from another recipe.

I was so busy eating these Chocolate-Peanut Butter-y bars of pure happiness that I didn't get a picture. I loved this recipe and the best part was that it's a dessert that doesn't require any baking (or stovetop cooking.) It's made entirely in the microwave and the whole thing can be made in less than 10 minutes. The recipe contains butter but I was able to really easily substitute dairy-free margarine and it still tasted fantastic!

Trisha's Southern Kitchen is my favorite cooking show. I love how down-to-earth Trisha is and it's the only cooking show I've ever watched that was funny as well. Unfortunately, since her show features Southern cooking, I'm allergic to most of the recipes. So I was very excited when she featured a recipe that I could use after making one small tweak to it (I used oil instead of the 4 tbsp of butter.) The end result was a really easy to make, hearty, delicious homestyle dinner.

I made these Taquitos once (minus the cheese) and they were pretty good, but kind of needed the cheese to make them great. But the seasoning mixture was so wonderful that I began making a big batch of it to use for tacos, bean dip and various other recipes. I love it so much that I always keep a jar of it in the pantry.

I would love to hear about your favorite Pinterest recipes in the comments section!
Labels: Food Pinterest