Last week I read 8 books, but I'm saving 2 of them for next week's Thursday Throwdown. I'm so excited to tell you about the other 6. 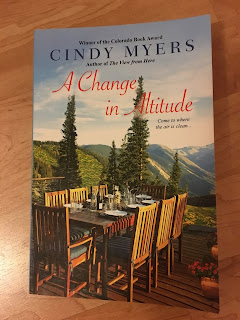 Last week, I let all of you vote on two of the books that I would read. This was one of the books you picked. So if I disliked it, it was all your fault. Kidding. Just kidding. Change of Altitude is about a woman who flees a bad marriage with her teenager daughter and moves to the town of Eureka in search of both her brother and a fresh start.

I really disliked this book for the first 20 pages. It was so bad that I almost stopped reading. The only thing that kept me reading at that point what that it was the book my blog readers voted on and I didn't want to have to write this blog post and say, "Remember when I let you vote on the book I would read?Oh you thought I actually meant that. Suckers." So I pressed on with the book for you (and also so I wouldn't look like a jerk on my own blog, but mostly for you.) And I'm so glad that I did, because the book got so much better after I passed the 40 page mark. I never got to the point where I loved the book, but it was a solidly enjoyable read. Although one of the main characters was named Jameso, and this was so annoying that by the end of the book I was on the verge of shouting up at the sky, "WHY. WHY. WHY. WHY AM I BEING AFFLICTED THIS WAY?" Hey authors of the world, is it too much to ask that you don't pick names that are so annoying they make us start to involuntarily twitch?

Note: This is book 3 in a series. I have no idea how that fact escaped me when I was buying the book. But it's the kind of book where you can jump into the middle of the series pretty easily. 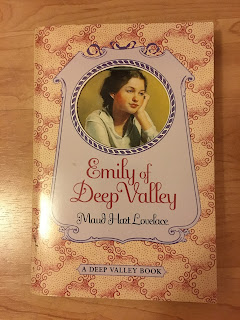 I didn't have high hopes for Emily of Deep Valley, a novel about a teenager girl named Emily who lives with her grandfather in 1912. Emily desperately wants to go to college with all her friends but feels an obligation to stay and take care of her grandfather.

My expectations were quite low for this book because I read 2 books by this same author last year (the first two books of the Betsy-Tacy series) and despite expecting to love them, I couldn't even make it all the way through them. They were so boring and I was quite disappointed. But then I read about how Laura Ingalls Wilder enjoyed Maud Hart Lovelace books, plus they were already in my to-read stacks because I was so sure I would love this author that I bought almost everything she ever wrote in one big book-buying frenzy. So I decided to give this author another shot. And I loved this book. I loved it so much that I'm going to still try to read the rest of the Betsy-Tacy books. Maybe the later books in the series will be better. 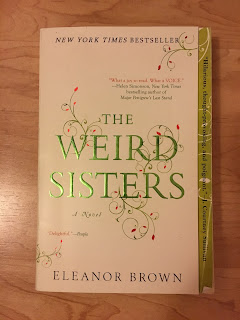 This was the second book you voted for. The Weird Sisters is a novel about 3 sisters who come back home under the guise of visiting their sick mother, but they're really all there because they're failing at life. They are also boring. Very boring.

Reading this book made me feel like I had accidentally taken nighttime cough medicine during the day. I was so confused the entire time because the story kept jumping from first person to third person. And when I say it jumped from 1st to 3rd person, I don't mean at the end of each chapter, I mean in the middle of a paragraph. First the story is being told by an unknown narrator, and then in the very next sentence it switches and it's being told from the point of view of one of the sisters, except it was never clear which sister it was supposed to be and then at other points it was being narrated by two sisters at once. Sometimes it even switched narrators mid-sentence. By the end of the book I was shuffling around muttering to myself, What's going on. What's happening. Did someone slip a hallucinogenic drug into my water. (Okay, my jumbo size high-fructose corn syrup-laced Strawberry Lemonade that I got from Wendy's.) I checked Goodreads to see if anyone else noticed this, or if perhaps my brain was just disintegrating under the weight of the 3 pounds of sugar I was consuming. But it wasn't just me. Other people noticed and were annoyed too. VINDICATED. 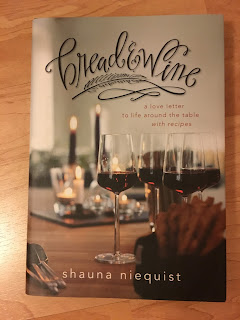 I approached Bread & Wine, which is essentially a love letter to food with a Christian slant, with some trepidation. Sometimes I really enjoy this author and sometimes the proclivity for describing difficult things that have happened in her life in the vaguest way possible annoys me. This seems to be a regular feature in Christian non-fiction lately, to spend a great deal of time talking about the emotions the author has about a difficult event in their life without ever telling us what the difficult event even was. I also don't enjoy Christian non-fiction that's too preachy. If I want to spend time with Ned Flanders, I'll watch The Simpsons.

I'm happy to report that, just like that time in junior high when my Mom wouldn't let me watch The Thorn Birds because it would "give me ideas," my concerns were unfounded (And by the way, Mom. I went to my friend Meredith's house and watched the mini-series anyway, and despite your concern that it would "give me ideas" I have, to this day, never once had an affair with a priest. So you worried for nothing!)

I'm sad to report that I'm allergic to almost all of the recipes in this book. The recipes left me in a reading quandary: Since I'm keeping track of the number of pages I read, should I read the recipes as well? I started out attempting to read the recipes, but I quickly realized that reading a recipe for a food I will never make it about as interesting as watching a high school field trip, so I skipped reading them and didn't count them toward my final page count.

I really liked this book. I sat down to read it, intending to only read a few pages and then go do boring stuff like laundry and cleaning, and then I ended up playing the "just 2 more pages game" for the next few hours. 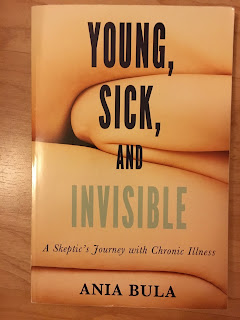 I think I mentioned in a previous post that I have a chronic illness (nothing serious or soap-opera level dramatic) and so I like to read books about people who are living with chronic illness. It makes me feel like I'm attending a support group without the hassle of having to put on real pants. Unfortunately, I really couldn't relate to this book. The author has much more serious health problems than I do, and she seems so overwhelmed by dealing with the day-to-day realities of managing such a serious health problem that there's little room left over for the kind of new-agey, navel-grazing that less ill people like me have the luxury of engaging in. This is certainly not a mark against the author, and probably more of a sign that I watched too much Oprah in the last 90's.

And on a really shallow note, am I the only one who finds the cover of this book really odd? It looks like a bunch of naked people were playing Twister. 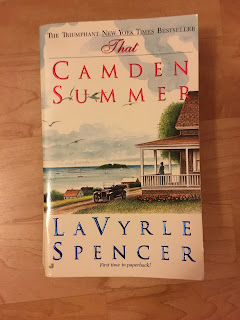 I love Lavyrle Spencer novels and I don't even care who judges me for reading books that aren't highbrow literature. Her books are considered romance novels, but what I like about them is that they feature other storylines besides just the central romance, and they're frequently set in other time periods. That Camden Summer is set in 1916 (love that time period!) and features a woman who returns back to her hometown with her three teenager daughters after getting divorced. Since this is 1916, most of the townspeople are total jerks about her being divorced (Behind the scenes blogging moment: I wanted to use a stronger work than jerk, so I googled synonyms for a certain swear word that starts with an A and the best the Internet thesaurus had to offer was "jerk." Gee thanks, thesaurus, I could have never come up with such a clever word on my own.)

This wasn't my favorite Lavyrle Spencer novel, but it was still really good. It was pure comfort reading. It was a curl-up-under-a-quilt-on-a-snowy-day-with-some-chocolate-nearby kind of book.

I would love to hear about what you've been reading lately. Let me know in the comments section.
Labels: Book Challenge Books