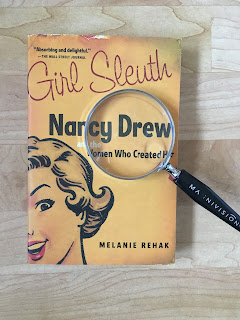 Here's the synopsis from the back of Girl Sleuth book:
Nancy Drew has survived the Depression, World War II, and the sixties to enter the pantheon of American girlhood. Here, with all the vivid energy and page-turning pace of Nancy's adventures, is the first behind-the-scenes history of our beloved girl detective. Behind the blue roadster, cloche hats, uncanny timing, and constant presence in the lives of American girls lies an enduring literary mystery: Who created Nancy Drew and how did she go from pulp heroine to icon? Melanie Rehak has put together all the clues and tracked down all the suspects; grab your flashlights and join the gang as we find out the truth about Nancy Drew.

The synopsis made the book sound like it would answer all our questions about Nancy Drew, and it did answer a lot of them. However, my most pressing question went unanswered. Why does Nancy look like she's on amphetamines on this cover. Was she on uppers? Did she just drink 12 lattes? And is that how Nancy was able to be up at all hours of the night, solving those mysteries while still remaining so perky? So many mysteries that this book didn't solve. But that's okay because it was still a really fun book.

I didn't read very many Nancy Drew books as a child. I was more of a Babysitter's Club kind of girl. So I wasn't expecting to like this book as much as I did. But it was full of interesting information and fun facts like how Nancy Drew narrowly escaped being named Stella Strong. Does anyone else think that sounds like a stripper name, or is it just me? Other, less strippery names that were also under consideration; Diana Drew, Diana Dare, Nan Nelson, Nan Drew, and Helen Hale.

Later in the book there was a quote from a writer (although it doesn't mention which writer - I hate it when books do that) who described the books being produced for children during the early part of the 20th century as "an insidious narcotic with the habit-forming properties of opium." I guess that means I didn't have as wholesome of a childhood as I originally thought - I was really just an addict looking for my next fix. I love it when people from the past describe reading novels as if it's a totally depraved activity. It never fails to amuse me.

I'm starting to get the reading shakes, so I better go give in to my insidious addiction and read a novel!
Labels: Books