I mentioned in my Vacation Prep post that I was going to take a new approach to picking books for vacation.  Instead of spending tons of time trying to pick out the perfect books for vacation, I stood in front of my to-read stacks, closed my eyes, and pulled some books out and packed them. Then I took the time I saved and used it to pack 12 shirts more than I needed. In my defense, my problems with over-packing have significantly improved from the low point I hit when I was ten-years-old. That low point involved packing a calculator, six pairs of shoes and every toy I owned for a weekend trip to an amusement park. How was I supposed to know that there was never going to be the need to change my shoes 6 times, calculate something and then consult my Magic 8 Ball while standing in line for a roller coaster?

The results of choosing mystery books was kind of mixed. I read two books that I didn't like very much, two that were pretty good, and one that I really liked. I think I enjoyed the results better when I spent ridiculous amounts of time trying to decide what to read rather than just closing my eyes and picking, but it was a fun experiment to try once.

My absolute favorite of the vacation mystery books was Dancing with Fireflies by Denise Hunter. 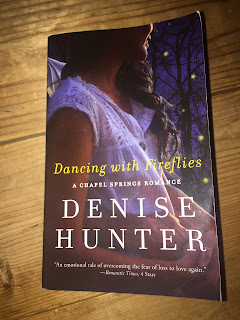 Here's the Readers Digest condensed version of the plot of this book: girl gets pregnant, girl moves back to former hometown, boy who has been in love with girl for years but is not the father of her baby tries to help girl, girl lies about pregnancy, boy finds out, boy and girl get locked together in a closet (well of course they do, have you ever read a romance novel where two people are fighting an attraction and they don't get locked up together somewhere), girl almost gives in to her attraction but then instead does some stupid stuff to push boy away, bad things happen to boy, girl finally realizes she's being an idiot, boy and girl end up together (I don't feel like I'm giving anything away by saying they end up together because it's a romance novel, so of course they're going to end up together. I would have felt like a dog who had their food bowl moved without warning if the book had ended any other way.)

This book was way outside of my comfort zone because it's a) a romance novel and b) Christian fiction. I don't usually like either of those genres, but I bought this book anyway because I've watched storylines similar to this on soap operas and enjoyed them and also the cover was pretty (I was feeling just the tiniest bit of shame as I typed that last sentence.) The author did a great job of avoiding the things that irritate me about romance novels and Christian fiction. I tend to dislike romance novels because the main characters usually spend 275 pages being rude and mean to one another before finally realizing they're in love. Witnessing people being mean to each other is not my idea of a good time (with the exception of J.R. and Sue Ellen on Dallas. They made rudeness so entertaining.)

And I don't usually like Christian fiction because most of the books I've read in that genre have gotten a bit too preachy and I end up feeling like I'm trapped in an elevator with Ned Flanders. I prefer a more gentle, subtle message that's woven into the plot of the book. The author delivers on that point as well.

I would definitely recommend this book, and I plan on reading more Denise Hunter books in the future!
Labels: Books