Something From the Oven 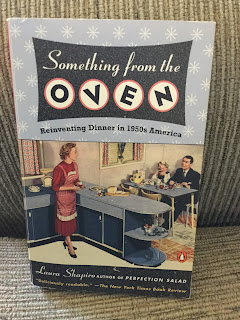 I love to read and I love to cook, so what could be better than a book about food!

Something from the Oven by Laura Shapiro takes a look at the beginning stages of the processed food industry. Contrary to popular myth, American women did not instantly embrace time-saving processed foods. They felt like making food from a mix was cheating. And so the food companies invented the term glamorizing. Glamorizing is when you take a packaged food and add enough special touches to it that you can almost convince yourself you've made something from scratch. If you prepare a carrot cake from a mix then you're merely baking from a mix, but if you add a little bit of freshly grated carrot and stir in some raisins and walnuts then you're glamorizing. I really love that expression. I feel like making something from a mix right now just so I can say, "I have to go glamorize dessert."

My favorite part of the book; There's an excerpt from an article published in the 1950's about the future of the food industry. The article describes life in the year 2000, in which people fly to the grocery store in helicars and then have a pleasant walk from the rooftop parking lot into the store because the entire outdoors is air conditioned. It then paints the happy scene of a man and his friend returning to a kitchen-free home where his wife prepares dinner by sliding back the wall to reveal a row of shelves that contains nothing but frozen food. She proceeds to cook the frozen food in a metal box for one minute. Yes, that's right, the author was able to imagine a world in which cars fly, the outdoors is air conditioned, and everything can be cooked in exactly one minute, and yet was still unable to even imagine a world in which a man would walk over to the metal box and put the food in himself. A man cooking his own food? Why that's insane. Get out of here with that crazy talk of yours.

All in all, it was a really interesting book that I've re-read about 5 times. If you are interested in food or history, I would definitely recommend this book!

I have to go now, dear readers because I have to glamorize a snack.
Labels: Books